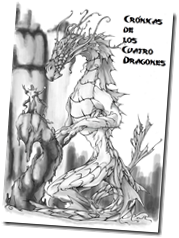 The guys at Arcano XIII have done it again! They translated and released another Stargazer Games title in Spanish. This time they took my pretty barebones roleplaying game “Chronicles of the Four Dragons” and turned it into a beautifully laid out PDF.

The new artwork by Jesús “Terminus Est” Calvero fits my vision of the game perfectly. If you are into anime-inspired roleplaying games and familiar with the Spanish language you definitely should check out Crónicas de los Cuatro Dragones!

Since I moved all our products to Google Docs/Drive two people reported that they have issues downloading the PDFs. I have tried figuring out what went wrong, but I am afraid I couldn’t. For me the links work perfectly fine, regardless of whether I am logged on or not or from where I try to access the files.

What I need is your help. Even if you already have downloaded all of our games before, please go the product pages here at Stargazer Games and check if the “Download Now” links work for you. Please use a simple click and don’t righ-click to use “Save link under…”. If everything works fine, you should get to a Google Docs/Drive preview that shows the product in question and allows you to download the file.

If it doesn’t, please give me some feedback in the comments below or on our forums. And check if you have problems with downloading stuff from Google Drive/Docs in general. Thanks for your help!