Resolute, Adventurer & Genius has been released! 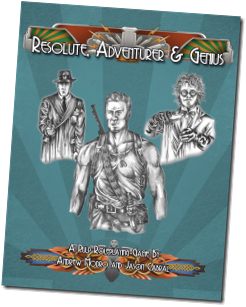 Blue Hex and Stargazer Games are proud to announce the release of Resolute, Adventurer & Genius, a roleplaying game of pulp action and adventure written by Andrew Modro and Jason Cabral, with visual design and layout by Michael Wolf.

RAG uses the Wyrm System, popularized in Michael Wolf’s Warrior, Rogue & Mage, a lightweight engine that bases character attributes on archetypes of the genre. The system has been adapted, with tweaks to combat and expansion of the Talent mechanic to present a range of powers and abilities that set characters apart from normal people.

The document includes character creation, resolution and combat and a range of skills and powers that can provide for a full game experience, but are also easily expanded. Like WR&M, RAG is a free game released under a Creative Commons license. It is available for download at DriveThruRPG as a 36-page PDF.